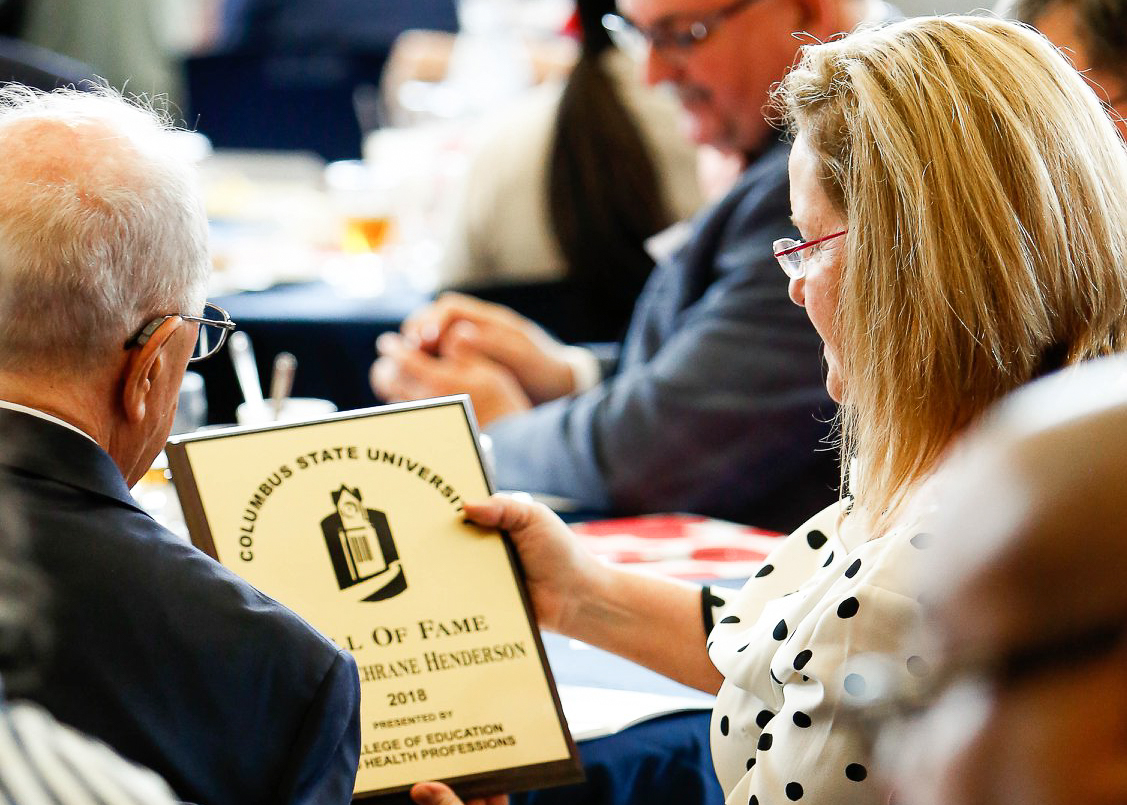 Every year during Homecoming, the CSU Alumni Association recognizes several alumni in five areas with its Alumni Recognition Awards. This year, seven alumni are being honored for their service and contributions to their respective fields and to Columbus State University.

The university will celebrate this year's honorees at an awards luncheon on Oct. 22 at the Cunningham Center. The program is part of the university’s annual slate of week-long homecoming events.

Dr. Cindy Ticknor (M.Ed. ‘98) is the 2021 recipient of the Thomas Y. Whitley Distinguished Alumnus Award. The award is the most prestigious award given to alumni who have distinguished themselves in their professional and personal life, exemplified high moral character and integrity and are held in high esteem by their fellow alumni. Ticknor currently serves as the dean of CSU’s Honors College and as a professor of mathematics education in its College of Letters and Sciences. She has served on the CSU faculty since 2003, during which time she has received over $2.5 million in grants to support STEM initiatives and has served as an associate dean of the then-College of Science. Ticknor is also a three-time nominee for CSU’s Educator of the Year Award. Recently, she completed a compilation of her three educational comic books, The Mysterious I.D. Vide in Newton’s Nemesis.

Stephen Butler is this year’s recipient of the Frank D. Brown Achievement & Leadership Excellence Award. The award is given to an organization, current or retired employee, a non-graduate alumnus, or a supporter of CSU who has contributed to the university’s educational excellence. In 1974, Butler joined the W.C. Bradley Co. full-time, and in 1987, was elected chairman and CEO of the company. In 2008, he turned over his role as CEO and served as executive chairman until he retired in 2018. Butler currently serves as the chairman of the Synovus Bank Advisory Board and serves on various esteemed boards, such as the Bradley-Turner Foundation, Teen Challenge Southeast and the Columbus State University Foundation.

The CSU Alumni Association honors two with its Distinguished Alumnus in Military/Public Service Award, which recognizes alumni who are active duty servicemembers, veterans or in public service positions and have brought distinction to their career fields and the university. Joyce Dent-Fitzpatrick (B.S. ‘90; MPA ‘98) has worked at the Columbus Police Department (CPD) for 34 years—advancing during that time to her current post as assistant chief of police.

The second award recipient, Donald Bush (B.S. ‘81) serves as a lieutenant in the Columbus Police Department. Among his involvement in various community initiatives are National Night Out events.

Boris Abramov (B.M. ‘10; M.M. ‘14) is this year’s recipient of the Young Alumni Award, given to alumni who have graduated in the last 15 years and have committed to extraordinary work, research, volunteerism or service to CSU. With awards and honors from across the world, Abramov is currently the professor of violin in CSU’s Schwob School of Music.

Two alumni are slated to receive the Alumni Service Award, for outstanding voluntary service to the CSU Alumni Association or the university. Patty Taylor, (Hon. ‘17) owned the Academy of Fine Arts Dance Center for 45 years and currently chairs CSU’s Dance Minor Board of Advisors. In 2015, she established a multi-million-dollar planned gift to endow the Dance program at Columbus State.

Rashmi Hudson (B.B.A. ‘83; MBA ‘91) is the second Alumni Service Award recipient. Hudson is the founder and inventor of ALLTIMATE luggage. As a board member for CSU's tennis teams, Hudson has been instrumental in the success of the tennis program's annual Tennis Classic.

To register for the Alumni Recognition Awards luncheon, open to alumni as well as family and friends, please visit alumni.columbusstate.edu/homecoming-registrations.