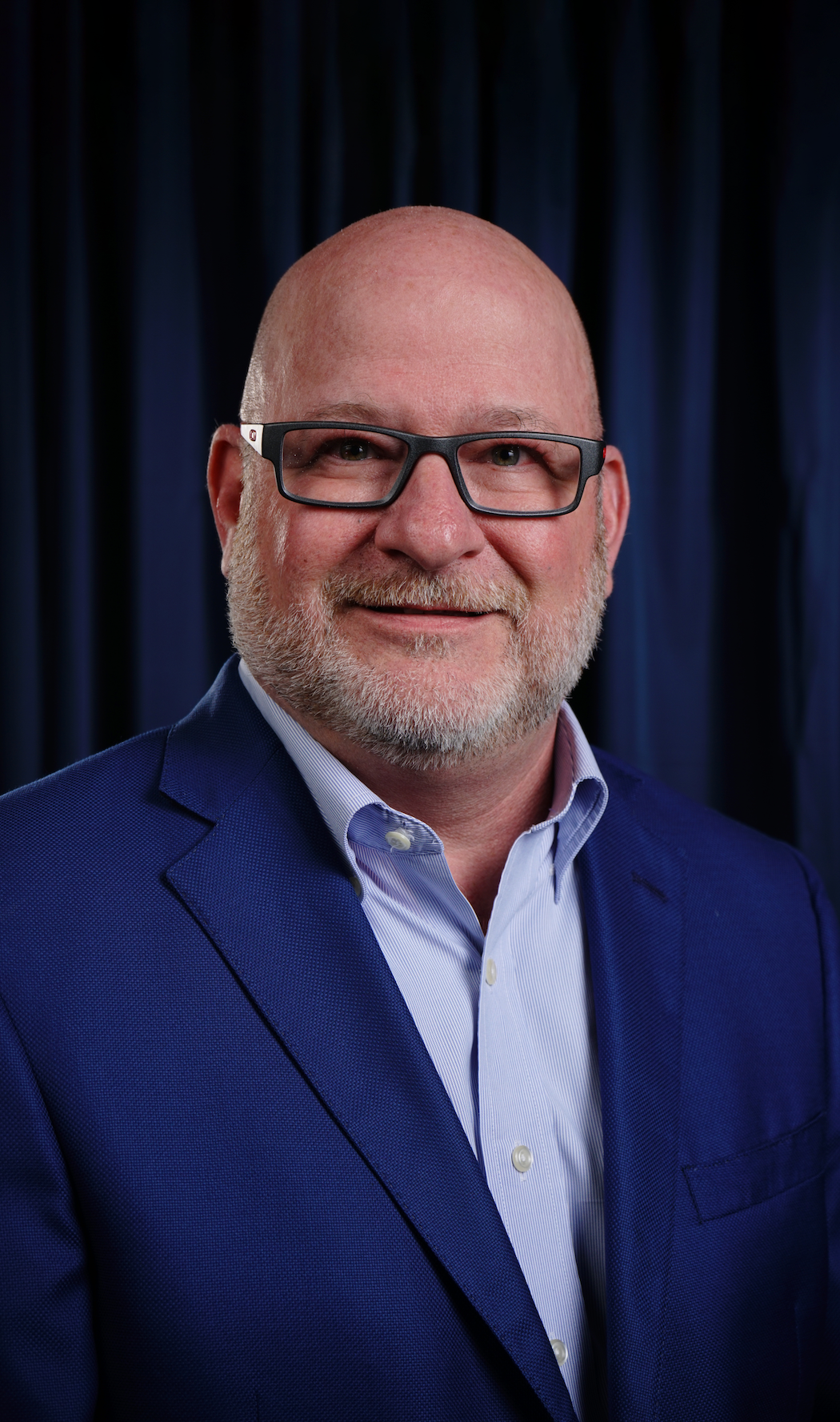 Nearly seven years after first setting foot on the Columbus State University campus, Dr. Chris Markwood has announced his plans to retire from public higher education and step down from his role as president in June 2022. His final day as president on June 30 will conclude a higher education career that has spanned three decades—with almost a quarter of that time at Columbus State—and marked by a focus on student-centeredness.

“President Markwood has made a point throughout his career to focus on students and make sure they had the support they needed on campus and in the classroom to succeed,” University System of Georgia (USG) Acting Chancellor Teresa MacCartney said. “We appreciate his service to USG and wish him and his family well.”

United with the Columbus Community

Soon after beginning his tenure as Columbus State’s fifth president on June 1, 2015, Markwood outlined a vision for strengthening the university’s communiversity identity and cementing its role in local and statewide workforce and economic development.

Community and corporate partnerships emphasizing innovation, undergirding local tourism and enhancing quality of life throughout the Chattahoochee Valley have peppered his presidency. New and reimagined events like WinterFest and CSU’s annual homecoming activities have welcomed the community to the university’s campuses and broadened the university’s reach into the community.

The university’s hallmark creative and performing arts programs, combined with new partnerships like those with StartUP Columbus, illustrate Markwood’s vision of combining the traditional and the contemporary for the community’s benefit.

“For more than 60 years, Columbus State has been intertwined with this community and its growth from a mill town to a boom town,” Markwood told state business leaders at the August 2021 Georgia Chamber of Commerce Congressional Luncheon. “Our community partnerships demonstrate that, without a doubt, education has a role to play in improving opportunities for our communities and the lives of those who call them home.”

Inspired by his own personal faith life, Markwood in 2016 began hosting an annual faith leaders’ breakfast to emphasize the community’s role in supporting students’ well-being. This focus expanded in 2020 with CSU’s new InterFaith Council, a gathering committee for campus and community faith-based groups to connect, program and communicate. This council has served to establish a forum to better serve the campus community and unite CSU with its local faith community.

Behind the scenes, Markwood has leveraged his presidency for both the community’s and Columbus State’s benefit. This has ranged to his service through the Rotary Club of Columbus and as a member of the Greater Columbus Chamber of Commerce Columbus 2025 Implementation Team.

In March 2015, shortly before beginning his tenure as CSU’s president, the university launched the First Choice comprehensive fundraising campaign with a goal of raising $100 million. When it concluded in 2019, the campaign had exceeded its goal by nearly 20% through gifts from 8,000 alumni and community donors. Its success funded capital projects including the Bo Bartlett Center and Frank Brown Hall—as well as numerous academic and athletics spaces on both campuses. It also created more than 50 endowments for student scholarships, faculty and programs.

“Very few universities enjoy such a symbiotic relationship with their communities like Columbus State does,” Markwood explained. “The philanthropic support we receive from our civic partners—as well as our alumni and other friends—rivals that of institutions much larger than us and are truly a catalyst in our success and the community’s future.”

Those partnerships—and the unprecedented philanthropic support they represent—have continued to fuel Columbus State’s success. They also have remained instrumental to Markwood’s view that higher education is fundamental to building a creative workforce that drives economic growth. In that regard, he has worked to align CSU’s signature academic programs with local, regional and national workforce development needs, economic development opportunities, and tourism objectives.

As a result, under his leadership, Columbus State launched nearly 30 new undergraduate and graduate degree offerings, created nearly an equal number of new certificate programs, and realigned more than a dozen academic programs. This includes being among the inaugural group of University System of Georgia institutions offering the system’s new nexus degree programs—designed to aid more Georgians in accessing careers in high-demand areas and to help employers identify highly qualified talent. In December 2020, Columbus State celebrated the USG’s first two nexus degree graduates, which were from its film production nexus program.

“Future employers are vital to universities adapting to evolving employment needs,” Markwood said of the role business partnerships play in the process of creating new degree programs. “They help guide us on how we can fortify our economic infrastructure and foster a diverse workforce comprised of servant leaders capable of seeing things in new ways, collaborating across disciplines, and discovering unexpected solutions.”

Just a few recent material outcomes of those corporate-community-academic partnerships have included:

For decades, Markwood has personally subscribed to the principle of “servant leadership.” As CSU president, he has sought ways to infuse this philosophy into how the university educates its students, develops its employees and serves its community.

This has included expanded leadership development programs for employees , which are offered in tandem by CSU’s Leadership Institute, Office of Human Resources and Office of the Provost. Students, on the other hand, benefit from CSU’s Servant Leadership Program and a variety of other initiatives intended to reach all CSU students offered through its Center for Servant Leadership. Following a generous gift from the Coca-Cola Foundation in 2019, the center was renamed for William B. Turner to honor him for his part in bringing the servant leadership concept to CSU and the Columbus community.

“Serving in and with this community has been one of the greatest highlights of my presidency at Columbus State,” he said. “The fact that I have been able to do that alongside my wife Bridget and with our daughter Reagan has been a blessing to our family and the genesis for what will surely continue to be a lifetime of friendships for us.”

Recognizing the importance of an institution’s reputation, Markwood spearheaded Columbus State’s first-ever branding study in 2018, which resulted in its current “Create You” marketing campaign.

“At Columbus State, ‘create you’ rallies our students, employees, alumni and partners to be creative to the core in all they do,” he explained. “This mantra continues to underscore how our academic, research and outreach initiatives cultivate creativity, inspire collaboration, reimagine education and expand worlds.”

Columbus State continues to see the tangible outcomes of curating its “creative to the core” brand through multiple national rankings. During Markwood’s tenure, CSU has remained a mainstay in U.S. News and World Report’s ranking of regional public universities and the publication’s social mobility index. Other publications and websites have lauded the university’s academic strengths in business, communication, nursing and online degrees, as well as its military-friendly environment.

It was the University of Wisconsin-Superior where he moved solidly into the role of higher education administrator and executive. Between 2006 and 2010, he served as provost, vice chancellor for academic affairs, and dean of faculties before being appointed to serve as interim chancellor from August 2010 to March 2011. He then moved to Texas A&M University-Corpus Christi, where from 2011 to 2015 he served as provost and vice president for academic affairs.

Outside of his current local leadership and service roles, he has been a member on the executive board of the Peach Belt Conference (NCAA Division II) throughout most of his presidency and currently serves as chair-elect. He previously served on the Georgia Council on Economic Education’s Board of Trustees and the University System of Georgia’s Comprehensive Administrative Review Steering Committee.

While president, Markwood has been honored both locally and statewide. In 2021, Markwood received the Meritorious Public Service Medal from the Department of the Army—presented by Major Gen. Patrick Donahoe, commanding general of the U.S. Army Maneuver Center of Excellence and Fort Benning. Georgia Trend’s 2022 list “100 Most Influential Georgians” marked his sixth consecutive appearance among the handful of university presidents across the state to be included each year.

“What has been achieved during my time at Columbus State is a testament to dedicated students, faculty, staff, alumni and partners who work and support our university and value the role of higher education,” Markwood said. “Thank you all for your friendship and partnership. CSU is an amazing place and we are so thankful for each of you.”

He and his wife, Bridget, have one teenage daughter, several bonus 20-something “kids” and one bonus grandchild. As a family, they enjoy cooking, traveling and the arts.