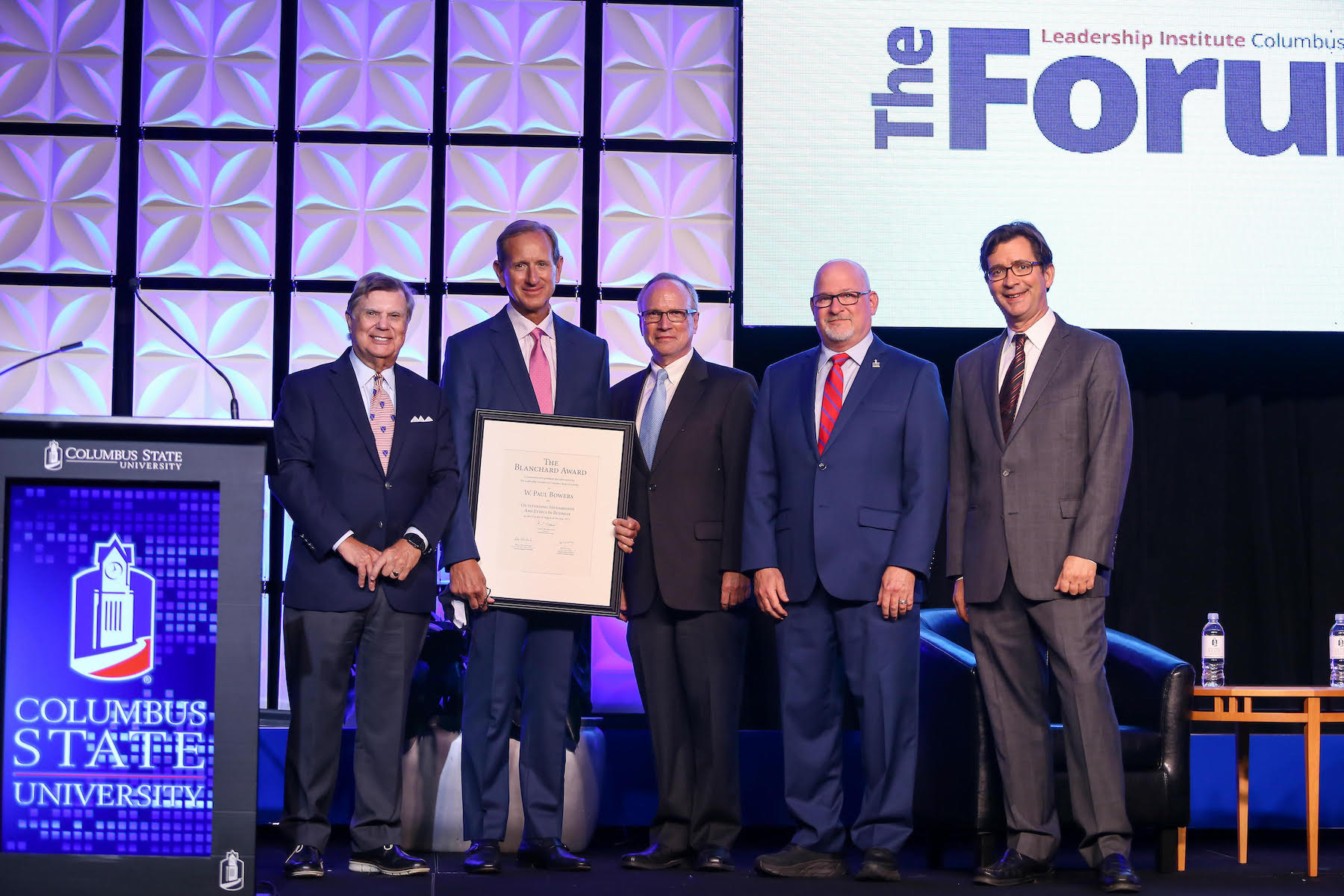 COLUMBUS, GA — W. Paul Bowers, former chairman, president and chief executive officer of Georgia Power, received the 13th Annual Blanchard Award for Outstanding Stewardship and Ethics in Business Tuesday afternoon at The Forum, hosted by the Leadership Institute at Columbus State University. The Blanchard Award recipient is selected annually by committee and presented during The Forum each year.

Bowers joined the Southern Company, one of the nation’s leading energy providers, in 1979 and has held executive leadership positions at multiple subsidiaries. From 2011 to his retirement in 2020, he served as CEO of Georgia Power.

He serves on the boards of AFLAC, Children’s Healthcare of Atlanta, Brand Safeway and Exelon, and is curator for the Georgia Historical Society. He is a past member of the Federal Reserve Bank of Atlanta’s Energy Policy Council, the Nuclear Electric Insurance Ltd., and the Board of Regents of the University System of Georgia.

For his professional achievements and his commitment to the well-being of the citizens of Georgia, he has previously received the American Jewish Committee’s National Human Relations Award and the Council for Quality Growth’s Four Pillar Award, and has been inducted into the Junior Achievement Business Hall of Fame.

In 2018, he was inducted as a Georgia trustee in the Georgia Historical Society by the governor of Georgia, the highest honor the state can bestow.

“Throughout his career, Paul has exemplified the highest standard of ‘not for self, but for others,” said W. Todd Groce, president and chief executive officer of the Georgia Historical Society and Blanchard Award Committee member when introducing Bowers at The Forum. “Under his leadership, Georgia Power was consistently recognized for excellence in customer service, customer satisfaction and reliability by J.D. Power.”

Established in 2009, The Blanchard Award for Outstanding Stewardship and Ethics in Business recognizes outstanding stewards of business ethics and corporate responsibility for success in these areas. The award’s symbol—and Georgia state tree—the live oak, is a perennial and universal symbol of rectitude.

The Leadership Institute at Columbus State University is a university-based consulting group that provides expertise and training in leadership development, team building, assessments, executive coaching and strategic planning. Founded in 2005, the Leadership Institute has worked with more than 200 organizations and helped develop thousands of leaders. For more information on how we can help your business or organization, visit www.ColumbusState.edu/Leadership.

Founded in 2005, The Forum, hosted by the Leadership Institute at Columbus State University, has been successful in fulfilling the vision of bringing the best and brightest minds in the world to Columbus. Held annually each August, the event draws more than 1,000 attendees. For more information, visit TheForum.ColumbusState.edu.