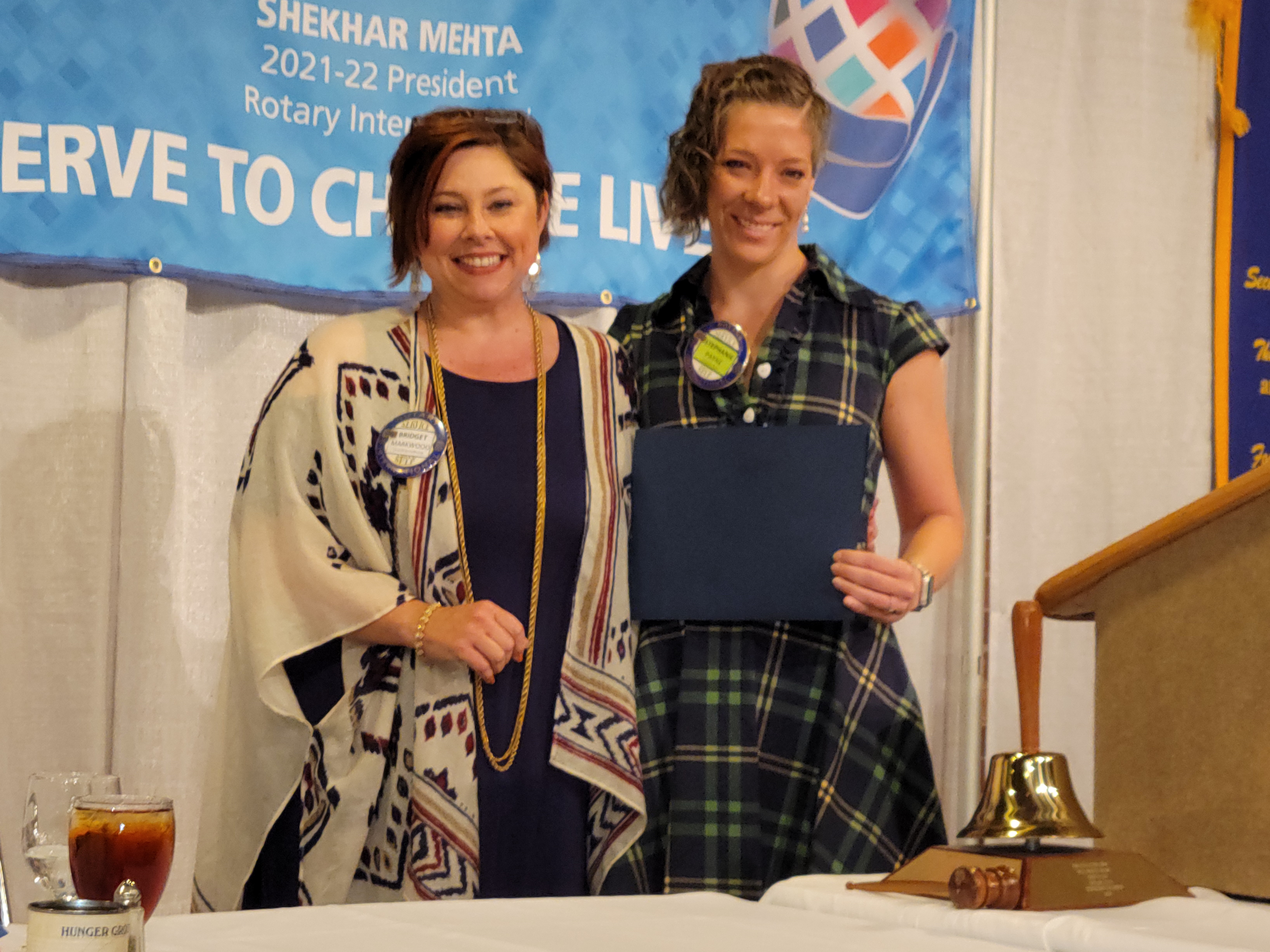 When someone at Columbus State University mentions a Markwood who is making the news, most would assume its President Chris Markwood. However, it was his wife, Bridget, who made news last week in local Rotary International circles as the recipient of the Rotary Club of Columbus’ annual Mary Reed Award.

The Mary Reed Award is bestowed on a Rotarian whose dedicated, personal effort over a sustained period enhances the quality of life in the Columbus area and/or the quality of Rotary International programs, as well as exemplifies Rotary’s “service above self” motto.

Central to Markwood’s 18 years of Rotary membership and 23 years of Rotary engagement—which has spanned several clubs throughout the United States—has been her involvement in the Rotary Youth Leadership Awards, or RYLA. This intensive leadership program organized by Rotary clubs and districts typically spans a three- to five-day period and provides high schoolers and college-aged youth ways to develop their leadership skills while having fun and making connections.

Markwood’s longtime investment in RYLA—but particularly the past two years—is what inspired Joe Young to nominate Markwood for the Mary Reed Award. Young, who presided over pandemic-era club programs as Columbus Rotary’s 2020-21 president, noted that health concerns required the club to continuously pivot and adapt—or in some cases, cancel programs during his tenure…but not RYLA.

“Bridget was determined not to let one of our long-standing, staple programs be canceled,” Young recalled. “She created from scratch a virtual learning experience for RYLA” that included personalized learning and engagement tools through which participants could engage in leadership and fellowship activities from their homes.

“The experience was just as engaging as RYLA ever has been,” Young emphasized.

When the pandemic raged into 2021, Young approached Markwood about expanding her virtual RYLA program to youth throughout District 6900, which spans 69 Rotary Clubs in west Georgia and north Florida. Markwood’s efforts were not contained to Georgia, however, as clubs and districts in California, Oregon, Texas, Oklahoma and Tennessee appealed to her to broaden the RYLA network to include fully virtual and hybrid options and lead implementation teams in their areas.

Examples of Markwood’s ingenuity are about as plentiful and colorful as the terms used to describe her in the lead-up to her announcement as this year’s recipient. Various video presenters referred to her as “infectiously wonderful…hardworking…kind…passionate about serving children and youth…bold…incredible…and amazing.”

Cedricia Thomas, who as the assistant director of internal leadership development of the Leadership Institute at Columbus State University, has collaborated frequently with Markwood through CSU and other leadership development programs. Thomas added “futuristic, a creative genius, and someone who is supportive of youth” to the list of praises.

“I have no intention of stopping,” Markwood said as she accepted the Mary Reed Award at the club’s June 22 meeting (a replay of which appears above). “I know I have to keep growing and building and seeing what we can do to help the next generation. The pandemic really hit them hard, and it was really enlightening to support almost 700 students across the country through RYLA in 2021. I’m so proud to be a Rotarian, and I’m so proud we can be there for them.”

Mary Reed, the award’s namesake, began her Rotary service by supporting her husband, Dan Reed, during his tenure as Columbus Rotary’s president in 1967, and later through her own role as the club’s executive secretary. Promoting fellowship and membership were hallmarks of her five decades as a Rotarian, which inspired the club to establish this award in her honor. Reed passed away in 2021 shortly after celebrating her 100th birthday.

Markwood leadership background is equally inspiring. She founded Leader N U, LLC in 1999 and serves as its CEO. The firm specializes in development of “power skills”—such as communication, teamwork, and other leadership and personal skills—for youth, employees and educators. Her work through Leader N U, LLC compliments and parallels the Rotary Youth Leadership Awards program, which began in Northwest Oklahoma’s Rotary District 5750—and has continued with her various professional moves alongside her husband, who is also a Rotarian.

Markwood became a Rotarian in 2004 as a member of the Edmond Rotary Club in Oklahoma. She served as the 2010-11 club president of the Superior Sunrise Centennial Club in Superior, Wisconsin, as the lieutenant governor for youth services as well as the Rotaract/Interact district chair for District 5930 in South Texas, and has been a member of the Columbus Rotary since June 2015. She is currently a Paul Harris Fellow +1, which acknowledges her past philanthropic support of the Rotary Foundation.

Her professional experience is not limited to leadership consultancy. Concurrently while leading her company, Markwood’s career experience has included serving as an adjunct professor of communication at Texas A&M University-Corpus Christi, associate to the chancellor at the University of Wisconsin-Superior, assistant director of campus life and lecturer of leadership at the University of Central Oklahoma, and lecturer of speech communication and coordinator of student union programs at Oklahoma State University.

Markwood holds two degrees in the field of communication: a bachelor’s from the University of Central Oklahoma and a master’s from Oklahoma State University.

Rotary International’s origins date back to February 1905 when Chicago attorney Paul P. Harris established the first Rotary Club. Since then, the organization has grown to international network of more than 1.4 million members serving their communities and the world through 46,000-plus clubs. The Rotary Club of Columbus, Georgia, was founded in February 1916 and currently numbers nearly 300 members.

For more information about the Rotary Club of Columbus, Georgia, visit rotarycolumbusga.org.